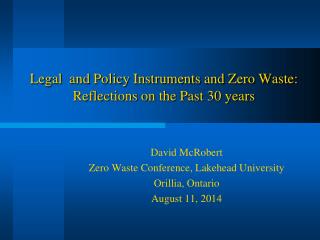 Light waves - . can light bounce?. yes! we call this a reflection. humans have been looking at reflections for thousands

Reflections on the Semester - . feraco myth to science fiction 22 january

Chapter 12 - . education policy in the united states: retrospectvive and prospective. focus questions. how has education

Solid Waste - . what is a solid waste. any material that we discard, that is not liquid or gas, is solid waste municipal