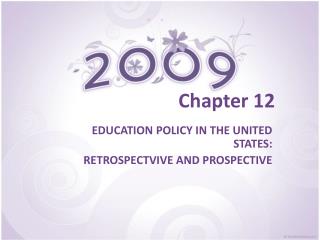 Chapter 12. EDUCATION POLICY IN THE UNITED STATES: RETROSPECTVIVE AND PROSPECTIVE. Focus Questions. How has education in the United States changed through history? How do the policy proposals of today relate to those of the past? Why is the policy environment today so turbulent?