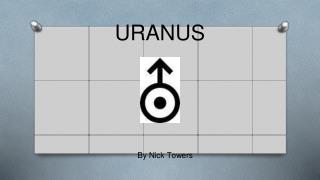 URANUS. By Nick Towers. The Name. Uranus got its name from the god of the sky. Uranus means “father of the titans” in Greek Mythology. Discovery. First planet discovered in modern times. Discovered by William Herschel on March 13, 1781.

Uranus - . alicia workman. did you know that uranus is 31,800 miles wide? it is called a gas giant! uranus atmosphere is