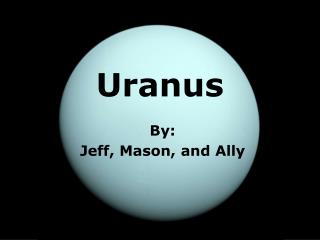 Uranus. By: Jeff, Mason, and Ally. Pronunciation NO: yer-anus YES: yu̇r-ə-nəs (yerinis). Basic Information. Uranus is the 7 th planet from the sun The name “Uranus” came from a Greek god ; the god of the sky. Uranus was discovered in 1781 by William Herschel . In the beginning… - . …there was chaos. and out of chaos…. gaea, mother earth, was created. and gaea gave birth to

课标人教实验版高一 Module 3 Unit 4 - . intensive reading. warming up. what are the names of the eight planets

Gaia - . &quot; first in my prayer, before all other deities, i call upon gaia, primeval prophetess . . . the greek

MISSIONS TO MARS - . probing the red planet. mars in books, movies, tv, radio. planets of our solar system scaled to