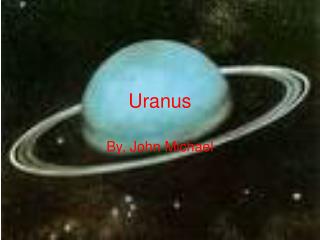 Uranus. By, John Michael. Uranus is the seventh planet from the sun and is named after the Greek God of the sky in latin. It is the only planet whose name came from a figure in Greek mythology as opposed to Roman mythology. What is a planet made of? - . one way in which scientists look at what a planet is made of is by looking at density.

The Planets - . science for teachers. introduction to the planets. a. two groups of planets. 1. inner planets --mercury,

Chapter 7 : Mentos - . chapter 7 the jovian planets. units of chapter 7. observations of jupiter and saturn the

Voyager 2 encounters with Uranus and Neptune

Discovery of Uranus, Neptune, Pluto - . the last 3 planets were discovered with telescopes , in the last 150 years or so

In the beginning… - . …there was chaos. and out of chaos…. gaea, mother earth, was created. and gaea gave birth to

Clicker Question: - . which planet most resembles our moon in surface features and atmosphere: a: mercury b: venus c: