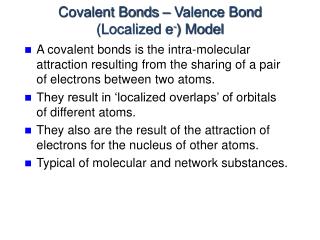 Covalent Bonds – Valence Bond (Localized e - ) Model. A covalent bonds is the intra-molecular attraction resulting from the sharing of a pair of electrons between two atoms. They result in ‘localized overlaps’ of orbitals of different atoms. Bonds with embedded options - . callable bonds. a problem with traditional pricing is that it ignores options imbedded in

How to Value Bonds and Stocks - . what is a bond?. a bond is a legally binding agreement between a borrower and a lender

Covalent Bonding - 20 october, 2014. covalent bonding. by the end of this lesson, you should be able to…. describe and