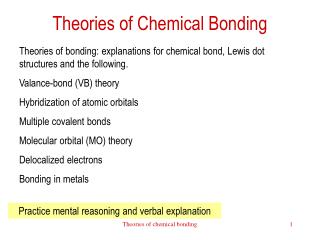 Valence Bond And Molecular Orbital Theories Overview - . parts of the material in today’s lecture have been borrowed

Advanced Theories of Chemical Bonding - . atomic orbitals. molecules. warm-up. what are lewis dot structures for so 2 ,

Chapter 10 Molecular Geometry and Chemical Bonding Theory - . in this chapter, we discuss how to explain the geometries

Theories of Covalent Bonding - . valence bond (vb) theory and orbital hybridization. the mode of orbital overlap and the