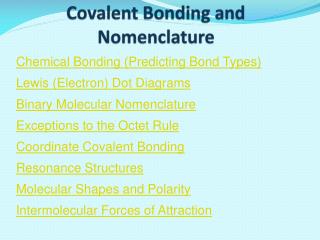 Bonding and Nomenclature - . honors coordinated science ii. electron configurations of ions. what does an ionic charge

Covalent and Acids Nomenclature - . a covalent bond forms between nonmetals and other nonmetals. . h is a nonmetal

Covalent Bonding - . i can write a formula for and name a covalent (molecular) compound. covalent bonds. recently we

Covalent Bonding - . bonding models for methane, ch 4 . models are not reality. each has its own strengths and

COVALENT BONDING - . when one nonmetal shares one or more electrons with an atom of another nonmetal so both atoms end up