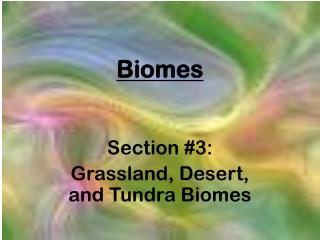 Biomes. Section #3: Grassland, Desert, and Tundra Biomes. Biomes of the World. found in climates that have less rainfall less rainfall = less species diversity although you might have less variety, you still might have high numbers of individuals in those species that are present.