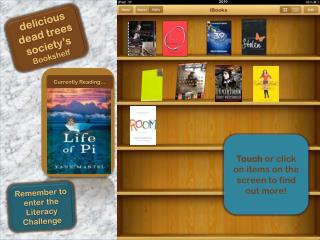 2010. delicious dead trees society’s Bookshelf. Currently Reading…. Touch or click on items on the screen to find out more!. Remember to enter the Literacy Challenge . Elsewhere. TH1RTEEN R3ASONS WHY.