Who Will Bear Our Sins? - PowerPoint PPT Presentation 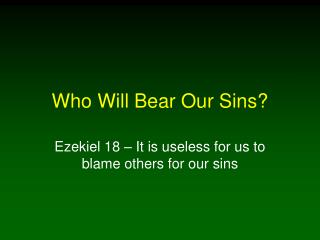 Who Will Bear Our Sins? Who Will Bear Our Sins?. Ezekiel 18 – It is useless for us to blame others for our sins. Introduction. Many confused about the definition of sin Also, confusion about who is responsible for our sins From Gen. 3 forward, man has sought to shift the blame for his sins to avoid consequences

Who Will Bear Our Sins?

Paul’s Theology of Redemption - . eph 2:1 and you he made. eph 2:1 when you were dead. through the trespasses and sins.

Early Logging in the San Juan Valley - . the railroad the camps the logging the union. by “ wild”. click to advance

4 Steps to Salvation - . step 1. salvation needed. why does a person need to become a christian?. . . .because of sin.

My Father is a Polar Bear By Michael Morpurgo - . timeline showing andrew’s growing knowledge about his father.

Brown Bear, Brown Bear - . presentation created by pat randolph in conjunction with the nebraska department of

Teddy bear making parties - Welcome to our magical bear factory where you can create a bear with our creative kits. teddy