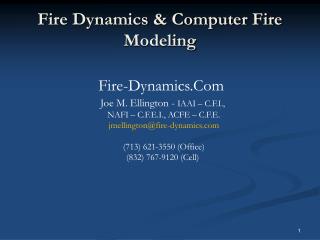 TEAM TALK GENERAL FIRE SAFETY - . general fire safety slide 1. the aim of this session is to provide you with information

UNIT 2: INTRODUCTION TO FIRE MODELING - . terminal objective. given two types of fire effects models, give an example of

Fire Physics, Nomenclature, and Modeling - . an educational program to improve the level of teaching risk-informed,

UNIT 1: FIRE DYNAMICS - . terminal objective. given a written exam, explain fire development and the effects of

FIRE MODELING OF THE SANDIA TESTS ( NUREG /CG-4681) - . an educational program to improve the level of teaching

Fire Safety - . at work and home fire fact: a fire department responds to a fire in the united states every 17.3 seconds.

fire damage restoration nyc - If you discover a fire, evaluate the situation quickly. with a small controlled fire, you