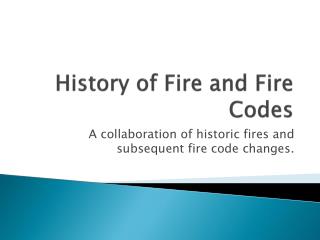 History of Fire and Fire Codes

History of Fire and Fire Codes

Fire Safety - . at work and home fire fact: a fire department responds to a fire in the united states every 17.3 seconds.

Fire - . fire suppression :. fuel and fuel vapors are the two leading ingredients in all boat fires and explosions if

Fire Safety - . each of these three elements must be present at the same time to have a fire. a fire will burn until one

Fire Safety - . at the conclusion of this training, the trainees should be able to: discuss how to protect patients,

FIRE SAFETY - . introduction. all health care professionals should be trained in fire prevention and in first-response