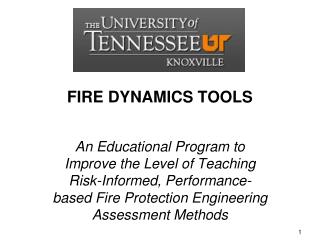 FIRE DYNAMICS TOOLS. An Educational Program to Improve the Level of Teaching Risk-Informed, Performance-based Fire Protection Engineering Assessment Methods. RESOURCES PROVIDED. All Participants will be given at the end of the course, a CD-ROM containing:

Fire - . fire suppression :. fuel and fuel vapors are the two leading ingredients in all boat fires and explosions if

Out of the frying pan &amp; into the fire - . dr duncan anderson vascular surgeon www.drduncananderson.co.za. the

Fire Drills: - . signal- long, loud buzzer students quickly, quietly and calmly stand up, push in their chair and form a

Program Development Tools - . the gnu (gnu’s not unix) toolchain. the gnu toolchain has played a vital role in the

Fire Extinguishers - . what you will learn…. types of fires fire triangle types of extinguishers how to use an