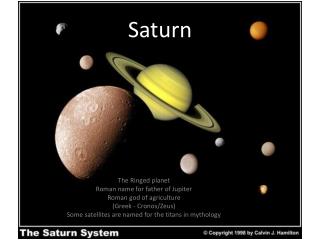 Saturn. The Ringed planet Roman name for father of Jupiter Roman god of agriculture (Greek - Cronos/Zeus) Some satellites are named for the titans in mythology. Saturn. Sixth planet from the Sun Second largest planet in the Solar System Another “gas bag” or “gas giant”