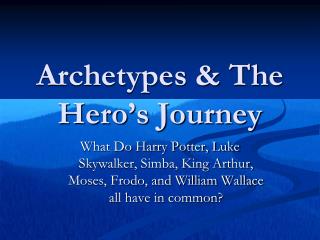 Archetypes & The Hero’s Journey. What Do Harry Potter, Luke Skywalker, Simba, King Arthur, Moses, Frodo, and William Wallace all have in common?. Jung and Campbell. Carl Jung and Joseph Campbell developed the idea of the archetype The Hero, The Tragic Hero, and The Anti-Hero - . the hero. traditionally in literature a hero is a character who

Who is your hero? What is your greatest interest? What was the highlight of your summer? - . 3.45 hours =

Archetypes of Wisdom - . douglas j. soccio chapter 3 the sophist: protagoras. learning objectives. on completion of this

The Hero Monomyth - . joseph campbell most quotes are from the power of myth taken from