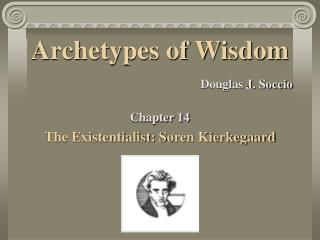 Archetypes of Wisdom. Douglas J. Soccio Chapter 14 The Existentialist: S ø ren Kierkegaard. Learning Objectives. On completion of this chapter, you should be able to answer the following questions: What is existentialism? What was the Kierkegaard Family curse? Archetypes - Your guide to the patterns in literature. definition of archetype archetype is a greek word meaning

WISDOM - . moral wisdom or prudence may be defined as the proper connection among the end or goal of an action, the means

Revelation Revealed - . last month we talked about wisdom of prophecy. all scripture is god-breathed and is useful for

Character Archetypes - . a brief overview of the basics of archetypes in literature. ms. mitchell’s class. from an

Herpesviridae Family - . dr.nehal draz. a good teacher is one who “…does not bid you to enter the house of his