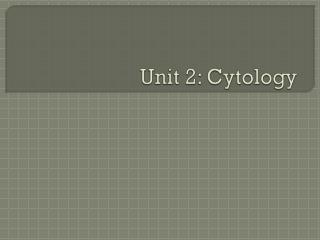 Unit 2: Cytology. §2.1 Nucleus and Nucleolus. The nucleus has been called a cell’s “control center” The nuclear membrane (or nuclear envelope) encloses it 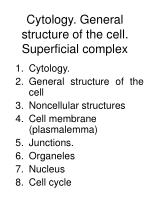 Cytology - . cytology = the study of cells cell = the structural and functional unit of all living things. cell

CYTOLOGY - . cytology. living organisms are made up of cells. either prokaryotic or eukaryotic cells. a. two major cell

Unit 2: Cytology - . §2.1 nucleus and nucleolus. the nucleus has been called a cell’s “control center” the nuclear

Cytology - . the study of cells. history of cytology. the cell theory. all living things are made of cells. cells carry

Cytology - . cytology. cytology : study of the structure and function of cells. cytoplasm : area of space outside the

Clinical Cytology - . clinical cytology: definition. cytology is the study of cell number and type in a tissue mass or