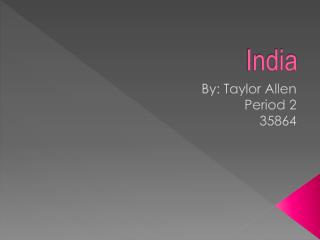 India. By: Taylor Allen Period 2 35864. Introduction. One-third the area of the United States, the Republic of India occupies most of the subcontinent of India in southern Asia. It borders on China in the northeast. With over 1.2 billion people, and the most populous democracy in the world.

Imperialism in India - . eq: how did imperialism impact india?. background. britain had trading posts in india since the

A trip to India - . by amita plantz ed 417. to find india on a world map: locate asia. india is a large country in

India - A land of Diversity ! - . aiesec delhi iit. can you locate india ?. india - its people. indians form one-sixth of

India - . by annie yin. introduction. this is a question-and-answer powerpoint about india. it talks about new delhi, the

India Wildlife Tour - Get best deals for trip to plan your holiday in india wildlife tour for your family .wildlife tour

Changing color of IT in India - S sadagopan, iiit-b bangalore science forum july 6, 2005 overview of the talk it in