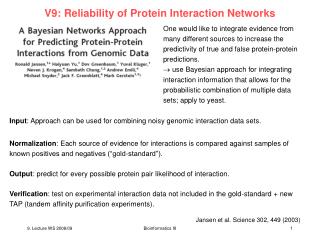 V9: Reliability of Protein Interaction Networks. One would like to integrate evidence from many different sources to increase the predictivity of true and false protein-protein predictions.

Is Your Organization a HRO? (High Reliability Organization) How can you tell? If not, why Not ? David Eibling Universit