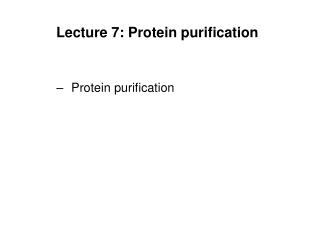 GFP protein purification lab - . what are we trying to do. 7.3- use e.coli that contains pglo plasmid w/ gfp gene to

Protein Purification February 5 2003 - . “a basic comprehension of the methods described here is necessary for an

Lecture 9: Protein purification - . protein structure use tables in book (voet and voet) for the properties of peptidases

Protein purification protocol - Objective of this course. to give practical training in various biochemistry