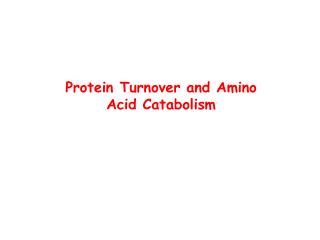 Amino Acids : Disposal of Nitrogen - . overview. amino acids are not stored in the body so, amino acids must be obtained

• Protein synthesis “Translation” - The letters of the nucleic acid is translated into amino acids. “from

Amino acid and Protein Chemistry - . dr.s.chakravarty mbbs,md. learning objectives. at the end of this lecture a student