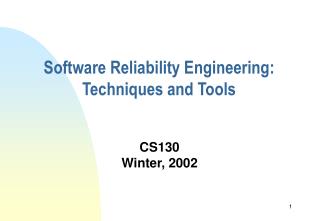 Software testing techniques Testing tools - . presentation on the seminar kaunas university of technology. why do we need

Reliability engineering - . william w. mcmillan. 28 march 2013. in non-functional requirements, what are some of the

Software Reliability - . notice: this set of slides is based on the notes by professor guattery of bucknell and by the

Software Engineering Tools and Environments - . outline. how did the field evolve? how can tools and environments be