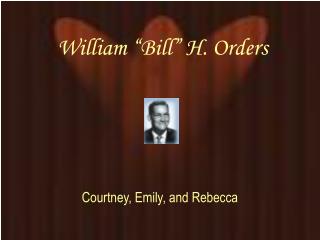 Bill Paxton: 1955 - 2017 - Bill paxton, who rose to stardom with roles in hollywood blockbusters, has died after

Order Sets and Nursing Orders - . order entry lesson 3. following completion of this lesson you will be able to: .

William the Conqueror - . who is william the conqueror . nationality: norman also known by the nickname: william the