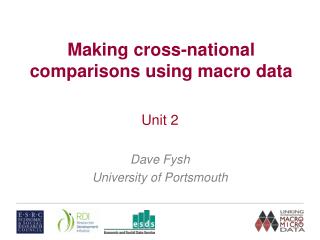 Making cross-national comparisons using macro data. Unit 2 Dave Fysh University of Portsmouth. We will cover. Problems of measurement in making comparisons Where does comparative data come from? Getting metadata What series are harmonised? Exchange rates as comparative data Programming with Macros on the Haas CNC - 2. i. goals of this class. understand the differences between a macro and a

Data-Driven Decision Making - . homeroom. what is homeroom ?. a data management system that pulls information from