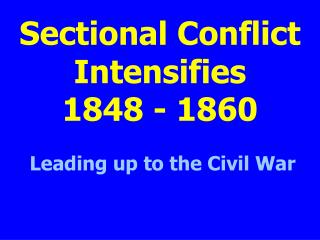 Sectional Conflict Intensifies 1848 - 1860. Leading up to the Civil War. Characterizing the Times. When the nation gained new territory, the slavery controversy intensified. Would new states be slave or free? Who would decide? The Market Revolution 1820 -1860 - . agrarian to industrial changes in america. the rise of interchangeable parts.

Analyze the characteristics of slavery in the USA before 1860 Disclaimer…Southern POV today - Day 100 objectives.