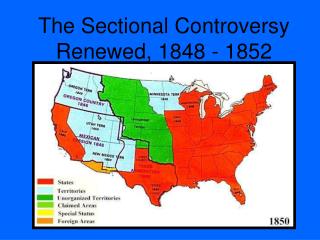 The Sectional Controversy Renewed, 1848 - 1852. In the presidential election of 1848, both the Democrats & the Whigs stayed silent on the issue slavery. Polk does not run. Taylor appeals to both North & South because he is a slave owner and a war hero. Soil - . dirt is simply misplaced soil!. soil: a renewable resource. soil is a slowly renewed resource that provides most

DSM-5: NOT WITHOUT CONTROVERSY - American psychiatric association. dsm-5: not without controversy. psychiatry’s manual

Understanding by Design and the NESD - . june 20 and august 29, 2012. big idea. constructing knowledge is the foundation

Sectional Differences Prior to the U.S. Civil War By: Brooke Long ED 629-01

Causes of the Civil War - . do now: brainstorm and write as many responses to the following prompt in your notebook: what