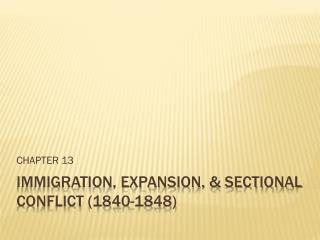 CHAPTER 13. IMMIGRATION, EXPANSION, & SECTIONAL CONFLICT (1840-1848). Expansion brought sectional antagonism to the boiling point, split the Democratic party in the late 1840’s, and set the nation on the path to the Civil War. Explain the following statement with evidence:.

Approaches to the study of Immigration - . migration is defined as the movement of people and their temporary or

The Second Wave: The Recent Asian Immigration - . the immigration act of 1965. abolished the national-origins quotas and