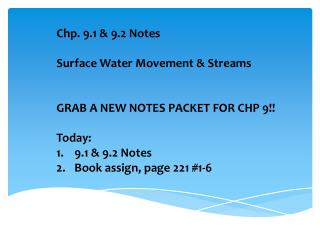 Water - . the hydrologic cycle. “whiskey’s for drinking, water’s for fighting over.” western saying. the critical

6 th International Workshop on Peritoneal Surface Malignancy - . these notes were adapted from the slides shown at the

1/31 do now - . an object is thrown straight upward from earth’s surface. graph the following for the time that elapses