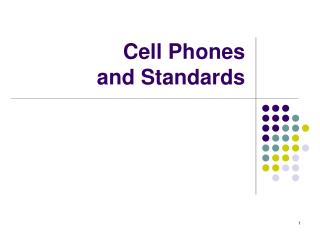 Cell Determination &amp; Cell Differentiation - . overview of birth lineage and death. all cells are derived from a

Protons for Breakfast Are Mobile Phones Safe? Week 5 - . november 2011. in the event of an alarm sounding…. this

Procurement 201 - . welcome and ground rules. have fun and enjoy the opportunities we have to contribute to sbbc’s

Enhancing Youth Performance and the MOSES Application - . 2006. logistics. training is from 9:30 am to 4:00 pm restrooms

Welcome to the Executive Force Preservation Board - . admin. restrooms exits phones please silence your blackberries and

Mobile Cellular Systems and Standards - . lecture 1. course overview. in this course you will learn the fundamental