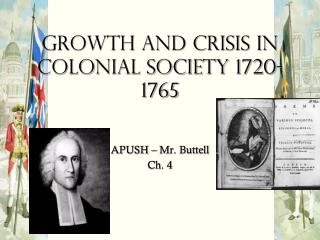 III. The Enlightenment and the Great Awakening, 1720-1765 - . social and religious conflict in the south 1. the

Colonial Society in the 18 th Century - . creating the american spirit. life in the chesapeake. population. life

Colonial Society - . a large colonial family. the family in colonial times. many colonists lived with their extended

The Colonial Society - . the enlightenment and the great awakening. calvinism and the puritans. john calvin- theologian

PUTTING DOWN ROOTS: OPPORTUNITY AND OPPRESSION IN COLONIAL SOCIETY - . america: past and present chapter 3. sources of