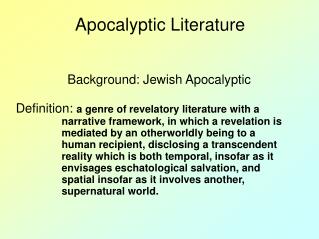 Living for God in a Pagan Culture - . daniel. the son of man and the kingdoms of men. (daniel 7). the book of daniel.

The Genre of Prophecy/Apocalyptic - . the purpose of prophecy. prophecy comforts – 1 thessalonians 4:18, john 14:1

Post-Apocalyptic - . by m ichael english. genre. post-apocalyptic films are based around what would happen if something

“It’s the End of the World As We Know It” - . discussing the apocalypse and post-apocalyptic literature with mrs.

1 Nephi 13 - 15 - . nephi’s vision is known as “apocalyptic” literature that centers on the theme of “the lamb

The Story-Line of Christian Apocalyptic Rhetorolect Lesson 2: Sodom and Gomorrah - . after the flood, the story-line of

American Literature 1 - Lecture i, american literature (1) autumn 2007. what is literature?. coming of the word the word