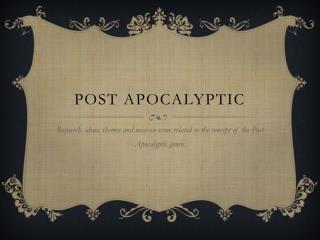 Crash Into A Dystopian or Post-Apocalyptic Universe - . celebrating popular young adult fiction through the month of

APOCALYPTIC LITERATURE - . some characteristics. “apocalypsis” means revelation or unveiling of what was hidden

Film Promotion and Marketing of Post Apocalyptic by Joanne Lloyd - . target audiences and importance of marketing