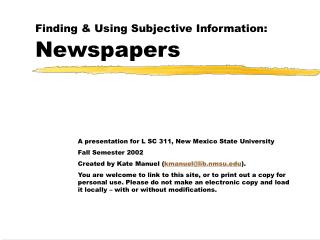 Judicial Credibility in India in 21st century - . by mission justice, mumbai april 2010 serial no. 0001. disclaimer. all

Unit Seven - . 一、宾语从句 the object clause that 引导的宾语从句 i think (that) i can sell newspapers. i

The Relationship Between Sport, Sponsorship &amp; the Media - . to learn to describe the positive and negative impact

Summary of Media Coverage - A journalist is a grumbler, a censurer, a giver of advice, a regent of sovereigns, a tutor of

Agenda - Nn. agenda. why do the research? guy how was it done? guy overview of results james the internet

My Name is Michael Fisher - . and i’m a superhero. history of superheroes. 1890’s newspapers added comic strips to

Citizen Journalism - Is the boom in user-generated content a boon or a threat to suburban newspapers? journalists,

Topics for Seminars &amp; Workshops in Your Library - Harness the power of library pressdisplay to explore, research