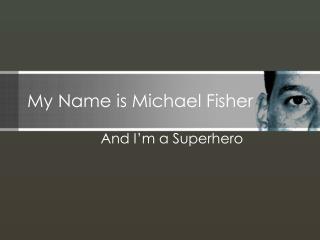 My Name is Michael Fisher

My Name is Michael Fisher. And I’m a Superhero. History of Superheroes. 1890’s Newspapers added comic strips to increase circulation 1933 a compilation book of comic strips called Funnies on Parade is published

My Name is Michael Fisher The Clark Fisher model of changing employment - . kq: how can you fit a country’s employment structure into the clark

The Myth of the Fisher King - . archetypes of the myth and its appearance in ron rash’s the world made straight by jane

Promises to Keep: Technology, Law, and the Future of Entertainment William Fisher July 2, 2003 - . outline. i. potential