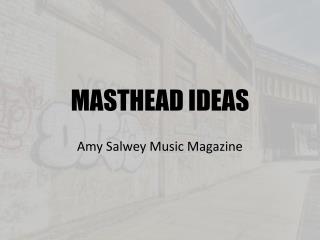 MY SMALL BUSINESS IDEAS - Nick: canarus please, comment my ideas ! also, if you need small ideas for your business, just

Five Great Ideas From the Course 21Things4Teachers - . by laurie iversen. there are many reasons we as teachers want to

TRINITY TOPIC PRESENTATION IDEAS - . grade 7. my first time in england important people in my life the lord of the rings

Chemical Ideas 6.7 - . where does colour come from?. 25 questions to see what you’ve remembered. more about the colour

Routing I: Basic Ideas - . ali el-mousa university of jordan elmousa@ju.edu.jo based in part upon slides of prof. raj

Differentiating Instruction - . sharing present practice: give a few ideas, get a few ideas.

EVALUATION OF MY MAGAZINE BY LAURENT ELLIOTT - . bold masthead . in what ways does my media product use, develops or

Front Cover - . bianca valdez. magazine analysis draft drawing. here is a copy of an nme magazine that i have purchased.

Magazine ideas - . idea:1 unsigned bands. this magazine will include information on the latest bands that are yet to be