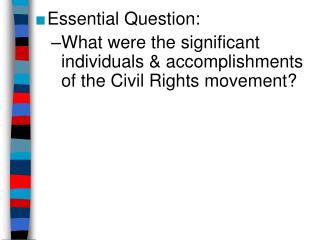 Essential Question : What were the key concepts that will be tested on the US History EOCT? - Cpush agenda for eoct

Essential Question - . is the land beneath our feet moving? if so, how? . history. until the 20 th century, everyone was

THE AGE OF IMPERIALISM - . essential question : what is imperialism and what factors led to the rise of imperialism?. the

Assessment Best Practices - . essential questions. what is the process for developing common formative assessments? how

Essential Question : What are the similarities &amp; differences among the Spanish, French, &amp; British