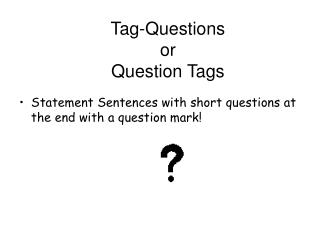 Tag-Questions or Question Tags. Statement Sentences with short questions at the end with a question mark!. Tag-Questions. A ‘tag-question’ or ‘question tag’ is not a true question.

40 QUESTIONS WE NEED TO ASK! - . brett lesley cumberbatch. importance of questions:. i believe the deeper the question

HTML - . the turn of the century. in the early days of the web html was a pretty simple language for displaying basic

2 nd Semester Challenge - . directions : after each question, write your answer on a separate sheet of paper. you will be

7 Jan - . opening question: welcome back! check out the new calendar for the next three weeks. agenda: intro to unit 6

How well do you know your University? - . 30 questions to make you think . question 1 . which cquniversity campuses are

Structure of the Test - . the regents exam tests material from 9 th and 10 th grade part i: 50 multiple-choice questions