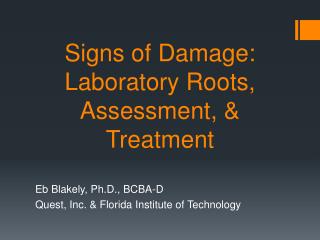 Diagnostic tests - . reasons for medical tests to confirm or exclude a proposed diagnosis to screen for disease to screen Assessment of The Patient - . 210a. objectives. list the elements of an effective and thorough bedside interview list the

Use of Laboratory Tests in the Evaluation of Pain - The basic pain laboratory battery. cbcacute phase proteins: esr,