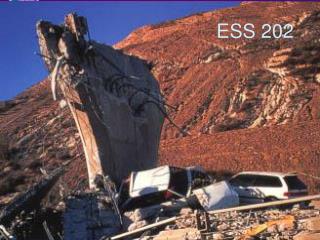 ESS 202. Earthquake damage Two main points. What are the ways that faulting causes damage? Why is there so much variability even between nearby areas in the degree of damage that occurs?. Hazards of faulting. Generally, quake hazard is from ground shaking “ And, lo, there was a great earthquake.” Paganism cast out - Theme : god answers the prayers of the saints. “ and,

Earthquakes - . what is an earthquake?. used to describe both sudden slip on a fault, and the resulting ground shaking

Folds, faults and deformation - . deformation of rocks. folds and faults are geologic structures caused by deformation.