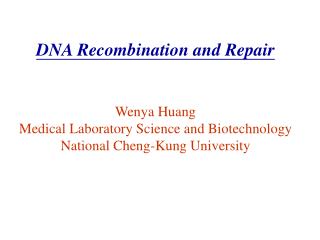 DNA Repair &amp; Recombination - . all 3 genomes in plants constantly being damaged by uv and other forms of

DNA and biotechnology - . what is dna?. “structure and function”: molecules are put together in a way so that their

DNA and Biotechnology - . how we make those gmos we have been talking about. every living thing on this planet is made up