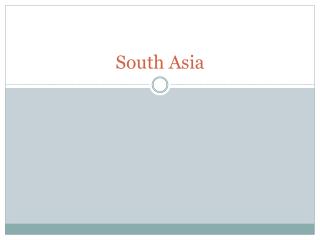 South Asia Unit - . the subcontinent. a closer look at the breakdown of india…. india is a federal union of states. 28

Advent of Islam and South Asian Society - . islam in south asia and the debates in indian historiography. british

South Asia - . monsoon. seasonal winds that bring rain in the summer necessary to water crops too much= flooding too

Patterns of South Asia - . physical terrain and settlement. mountains can act as a barrier for settlement. in what ways

South Asia: - . the cultural geography . scooby snacks. question 1 : what is the population of south asia and what

The Art of South and Southeast Asia Before 1200 - . south and southeast asia. religion is the main influence on art

Chapter 3 - . early african societies. the nile river. the nile is the longest river in the world. 4,160 miles in length