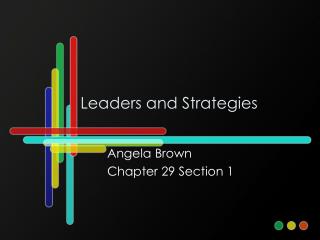 Power and Influence: Strategies for Leaders - . developing effective leaders. what is power?. the capacity to produce

Leaders and Leadership - . a. leader and leadership defined. leadership is the art of influencing people to get the

LEADERSHIP AND LEADERS - . in search of leadership (article by reingold). great leaders live with integrity, lead by

Leaders and Leadership - . chapter 10. learning objectives. explain what leadership is, when leaders are effective and

Leaders and Performance - . “empowering the world, one engineer at a time”. welcome. leadership skills and the circle

Leaders and Coordinators - . you were the key to the success of cm in year one: made this charity ground up – one run

Leaders - . think of people/coaches you have played with or against a c reate a list of… qualities/characteristics of a