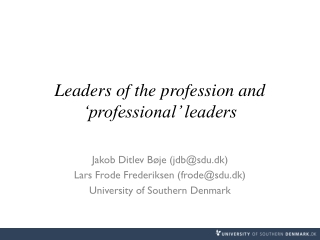 GUIDELINES FOR LEADERS - . ethical lessons from sitting bull. a presentation for the tribal leaders with character course

Who Are Our Leaders - . day 4 – 5. written by nicole ruge. day. 4. introduction. come up with definitions of each of

Leaders: Born, Made or Responsive? Chapter 11 and 12 - . leaders attempt to use influence to accomplish some goal. what

What leaders do - . leaders relentlessly upgrade their tem, using every encounter as an opportunity to evaluate, coach

OBJECTIVES - Teamstepps framework . say:leadership is the linchpin that holds a teamwork system together. effective

2008 Emerging Leaders - . welcome to emerging leaders'08. planning and preparation. recognize the opportunities for you

Military and political leaders of world war II - . the rise of dictators &amp; triumph of the allies during world war

Leaders of the past depicted in art - . social power characteristics and portrayal lesson. think of leaders from the

Being Leaders - . chapters 3 and 4. review: definition- leadership page33. christian leaders are servants with

HOW DO WE STUDY POLITICAL LEADERS ? - . the big questions: what exactly is a typology, and why is it useful to classify