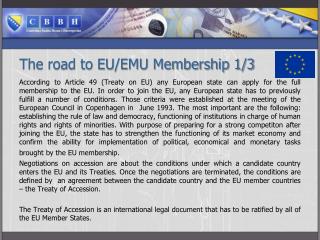 The road to EU/EMU Membership 1/3

The road to EU/EMU Membership 1/3.

The road to EU/EMU Membership 1/3

„Steps on the road to the EU Integrations ” - . european integrations department centra l bank of bosn ia and her z 7. EMU: the road to the crisis - . the global financial crisis as a trigger default risk , interest rates , house prices

UK Membership Update - Branch conference 2012 welcome thought for the day ‘’ tell me and i'll forget; show me and i