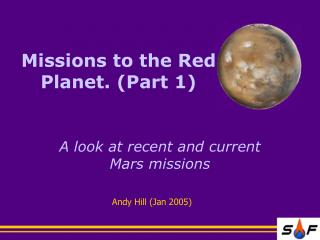 Missions to the Red Planet. (Part 1)

Missions to the Red Planet. (Part 1). A look at recent and current Mars missions. Andy Hill (Jan 2005). 2. Introduction. Mars has fascinated mankind for thousands of years and been a target for investigation almost since man first went into space.

Missions to the Red Planet. (Part 1)

Mission - Interim vision card 2012 and beyond a system of excellent schools columbus board of education february 1, 2011.

MARS “The Red Planet” - . by: courtney lewis &amp; joshua newcomb. how mars got its name. it got its name from

Mars: Earth’s little brother - . what are the similarities and differences you notice?. mars’s axis is tilted at 25

Mars - . by alec d. what was mars named after? mars was named after the roman god of war. this was also mimicking the

Mars: The Red Planet - . by sarah wolbach. what does mars mean?. roman god of war red color is associated with blood

MARS THE RED PLANET - . by: sergio gadebeku. mars is the 4 th planet. earth is mars neighbor the name sake for mars is

THE SOLAR SYSTEM - . made by a group of students from publiczne gimnazjum in przytyk. general information. the solar

Our Amazing Solar System - . sun our brightest star. approximately one million earths can fit inside the sun. the center

Texas Missions - . missions were spain’s main way of colonizing texas and were expected to support themselves. the

The Mission to Colonize Mars - . a home away from home… (yes, i know there aren’t oceans on mars, but come on…the

Introducing Planet Nine - Views of the solar system, as astronomers announce there may be a ninth planet about 10 times