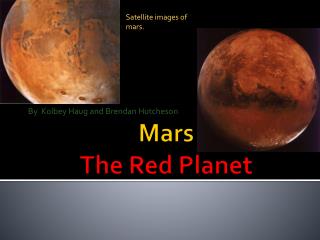 Basic Electronics - . basics in mathmatics. why is math important?. read the article “ math mistakes in history: the

Welcome to Mars Hill - . the market place of ideas. we live in a jesus haunted, biblically illiterate society. ben

Chap 11: The Jovian Planet Systems - . totally different planets than our familiar next door

Mathematics of Planet Earth - . discovering the earth. putting mathematical glasses to discover:. its shape and size:

Chapter 7 Earth and the Terrestrial Worlds - . what do you think?. why are venus (too hot), mars ( too cold ) and earth

20 mars 2009 - . a renewal story. safe harbor. this is an independent study performed by students from the faculté des

Unit 2 - . week 4 . monday opening. the big dipper is the name of a group of stars. the planet mars is close to earth!

The Origins of Life on Earth (or, a History of our planet in a week or less) - . biology 2, college of the atlantic

MARS “The Red Planet” - . by: courtney lewis &amp; joshua newcomb. how mars got its name. it got its name from

THE PLANET MARS - What we know about mars. the planet mars. mars is like earth because it has: clouds, ice at north pole,

Mars - . moons of mars. exploration of mars. ~1800: herschel and others discover ice caps and clouds 1877: phobos and

Mars: The Red Planet - . by sarah wolbach. what does mars mean?. roman god of war red color is associated with blood