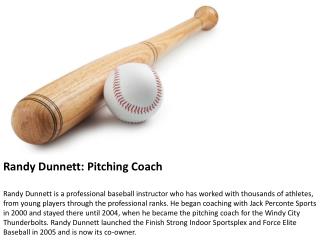 Randy Dunnett is a professional baseball instructor, and co-owner of the Force Elite Baseball Club. He played baseball at South Suburban College for two years, and went on to play at Belmont University for the 1998 and 1999 seasons. He earned a degree in Business Administration from Belmont. In 1999, Randy Dunnett began his professional career by signing with the Cook County Cheetahs. He played with the Cheetahs for two years before retiring in 2001. What a Rookie Coach Learned Putting in the Single Wing to 7, 8, and 9 Year Olds - . jerry nivison head coach tornados

SOFTBALL - . essential questions. what is the difference between pitching and throwing in softball ? what is the