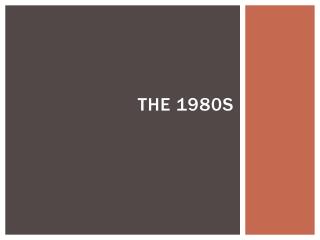 The 1980s. 1980 United States Hockey. “You were born to be a player. You were meant to be here. This moment is yours.” -Herb Brooks http://www.youtube.com/watch?v=8gfD134ED54. Coach Herb Brooks, Coach of University of Minnesota’s Golden Gopher Hockey Team