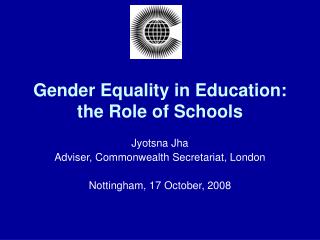 Non-Binary Gender 101 - . what is gender?. a complex combination of roles, expressions, identities, performances, and

Promoting Equality and Valuing Diversity - . this presentation will cover:. what is equality? equality act (2010)

How Do We View Men and Women? - . chapter 12 gender development and stereotypes. module objectives:. what is the

AIMS OF SSA - . to provide useful and relevant elementary education for all children in the 6 to 14 age group by 2010. to

How education can help achieve gender equality in the creative department - . dr. alejandra hernández university of